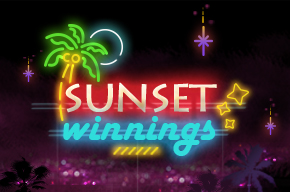 Bright lights, big dreams! Take a chance to try and find your fortune with Sunset Winnings, our dazzling instant game! Try to match any of Your Tickets to a Winning Number to win a prize. Collect all three Cherries to receive new numbers on Your Tickets marked with a Cherry, or find three Coin symbols to unlock free games. Will luck be yours tonight?

Each Sunset Winnings game features seven Winning Numbers, a Cherry Reveal Legend and up to 24 Your Tickets. Players may purchase plays in sets of 12 or 24. Each of Your Tickets has a number and a prize amount, or a Coin symbol.

In the Free Games Bonus, press the Play button to reveal seven Winning Numbers and 30 Your Tickets. Match any of the Winning Numbers to a number on Your Tickets to win the prize shown on that ticket. Reveal a Coin symbol to win all prizes shown in the indicated row, column, or both row and column. After seven reveals, collect your winnings, and exit the bonus round.