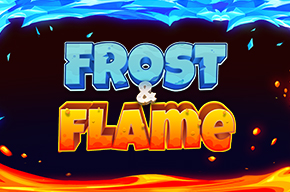 Heat up or cool down with Frost & Flame, our elemental instant game! You decide whether to take your chances on the icy tundra of the frost theme or face the fiery chasm of the flame theme. Get in your element, and then try to match any of the numbers on Your Tickets to any of the Winning Numbers to win a prize. Try to unearth three green gems to enter the Elements Bonus Game for another chance to win. Can you conquer the elements?

Frost & Flame is a multi-ticket game where the player can play ten (10), twenty (20) or thirty (30) tickets. Match any of the Winning Numbers to a number on Your Tickets to win the prize shown on that ticket. Find three (3) green gems on Your Tickets to enter the Elements Bonus Game and win a guaranteed prize.

The Elements Bonus Game will end in one of two ways:

The prizes are not accumulated. The player only wins the last prize reached.

Frost & Flame features a dual-theme option where the player selects the theme to play. The theme selection does not affect the prize structure or game instructions in any way.