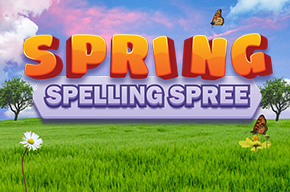 Take a break with Spring Spelling Spree, our fresh online instant game! Try to match one of your letters to one of the Winning Letters to pluck a prize. Reveal a sunny Surprise Symbol to spell out an instant prize, or collect three Star Symbols to play the Bonus Round for another chance to win. Dew not miss this chance to win!

Each Spring Spelling Spree game features five Winning Letters, up to 15 Your Tickets and an area for collecting Star Symbols. Players may purchase sets of five, 10, or 15 plays per game. Each play features a letter and a prize amount, or a Surprise Symbol.

Match any of the Winning Letters to a letter on Your Tickets to win the prize shown on that play. Reveal a Surprise Symbol to play a mini-game and win a prize. Reveal three Star Symbols in Your Tickets to immediately play the Bonus Round.

The Bonus Round consists of five rounds. In each round, 10 lines will be revealed. Press START to initiate each round. Match three numbers in a line to win the prize shown for that line. After five rounds have been completed, win all collected prizes, and exit the Bonus Round.