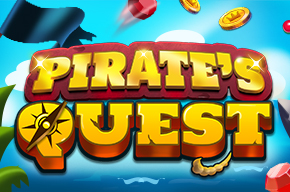 Ahoy there! In search of buried treasure? Set sail, and try to find a fortune with Pirate’s Quest, our nautical instant game! Try to make a cluster of three or more of the same symbol to plunder a prize. Try to find Map symbols for a chance to unlock up to 15 extra reveals. Uncover a Parrot symbol, or pull up an Anchor symbol, and see what the sea has in store! Is it a pirate’s life for you?

Each Pirate's Quest play features 35 symbols on an 7x5 play area. There is one way to win.

In addition, new symbols will fall into the board from the top of the play area to fill the empty spaces created by the cluster collapse. The winning clusters will award prizes according to the prize table per each symbol. Only the highest combination prize per winning cluster is awarded.