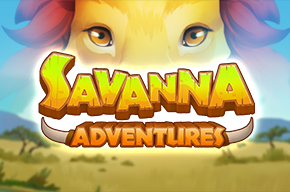 Go wild with Savanna Adventures! Try to make a cluster of three or more of the same symbol to win a prize. Try to discover certain symbols for another chance to win. Each play gives you a chance to win the Crown Jewel Jackpot! Can you catch the jackpot?

Each Savanna Adventures game features 35 symbols on an 7x5 play area. The game features winning clusters, an Expanding Win feature and Extra Reveals. There is one way to win.

Reveal three or more matching symbols in a cluster. The cluster needs to have three or more identical symbols attached to each other, either horizontally or vertically, in any shape. Three identical symbols positioned diagonally will not create a winning cluster. Once all winning clusters are formed, those clusters will collapse at the same time, and the remaining symbols will fall into the empty spaces on the play area.

New symbols will fall into the board from the top of the play area to fill the empty spaces created by the symbol collapse. Any prize will be awarded according to the prize table per each symbol. Only the highest combination prize per winning cluster is awarded. There can be more than one winning cluster simultaneously.

Both game features and winning numbers can appear in the same game.

There are multiple special features in Savanna Adventures: