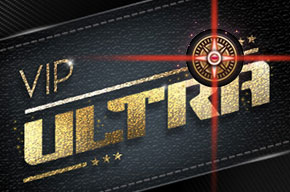 A chance to win ruby riches awaits with VIP Ultra! Try to match any of Your Tickets to a Winning Number to win a prize. Collect all three Rubies to receive new numbers on Your Tickets marked with a Ruby, or find three Coin symbols to unlock extra reveals. Each play gives you a chance to win the Crown Jewel Jackpot! Can you catch the jackpot?

Each VIP Ultra game features seven Winning Numbers, a Ruby Reveal Legend and up to 24 Your Tickets. Players may purchase plays in sets of 12 or 24. Each of Your Tickets has a number and a prize amount, or a Coin Symbol.

In the Extra Reveals Bonus, press the Play button to reveal seven Winning Numbers and 30 Your Tickets. Match any of the Winning Numbers to a number on Your Tickets to win the prize shown. Reveal a Coin Symbol to win all the prizes shown in the indicated row, column or both row and column. After seven reveals, collect your winnings, and exit the bonus.