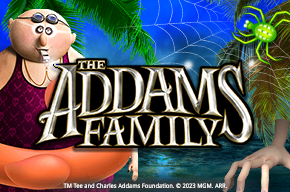 A chance to win a creepy, cool prize awaits in The Addams Family! Try to reveal a cluster of three or more of the same symbol to win a prize. It’s a scream!

Each The Addams Family game features a 5x5 grid of symbols and a Prize Chart.

Finding three CARD BONUS Symbols on one game board unlocks the CARD BONUS game. The player is presented with three cards. The player selects one card to reveal a prize. The Card Bonus game ends, and the prize is awarded.