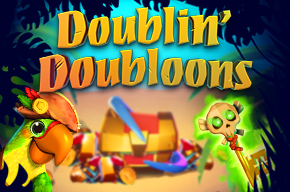 Set sail for a chance to find treasure in Doublin’ Doubloons! Try to make a cluster of three or more of the same seafaring symbol to win a prize. If you reveal three Keys, you’ll unlock bonus reveals on an expanded game board! If you discover three Chest symbols, you’ll get to choose one of the Chests and win the prize within it!

Play on, me hearties!

Each Doublin’ Doubloons game features a play area with 15 symbols in a 5x3 grid, a PRIZE CHART and locked expanded grids.

During each play, 15 symbols will be revealed in the play area. Reveal a cluster of three or more matching symbols where each symbol is directly above, below or to the left or right of another matching symbol to win the corresponding prize in the PRIZE CHART.

Reveal three CHEST symbols in a single game to play the Chest Bonus Game and be awarded a bonus prize.