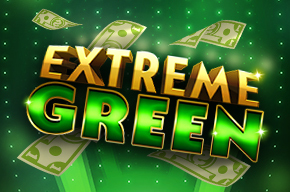 Try to bring home the bucks in Extreme Green! Try to reveal a cluster of three or more of the same symbol to win a prize. A fun chance to win some green!

Each Extreme Green game features a 5x3 grid of symbols and a Multiplier Meter.

During each game, 15 symbols will be revealed in the play area. Reveal a cluster of three or more matching symbols (where each symbol is directly above, below or to the left or right of another matching symbol) to win the corresponding prize in the Prize Chart. For each cluster revealed during a game, the Multiplier Meter will increase by one. At the end of the game, multiply your total game prize by the number reached on the Multiplier Meter.

Reveal three BONUS symbols to unlock the Vault Bonus Game. Upon entry into the Vault Bonus Game, open vault doors to reveal prizes until COLLECT is revealed. The player wins the total of the prizes that have been revealed in the bonus game prior to COLLECT being revealed.