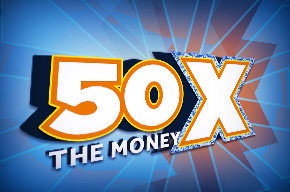 It’s fun multiplied! In 50X The Money, our new online instant game, the entire game is loaded with prizes that are 50 times the individual ticket cost. Try to match one of Your Numbers to a Winning Number to win a prize. If you reveal a Multiplier Symbol, you could multiply a prize by up to 10 times. Find at least three Coin Bonus Symbols to activate the Coin Bonus Game for another chance to win.

Each 50X The Money game features five Winning Numbers, a 4x5 grid of up to 20 Your Numbers and a Coin Bonus Game meter.

The player can choose between playing five, 10, 15 or 20 plays. Each play represents one tile in the grid, which features a prize amount and a number. After pressing Play, the selected number of plays will be revealed in the play area. Reveal a tile with a number in Your Numbers that matches one of the Winning Numbers to win the corresponding prize amount. If you reveal a Multiplier Symbol on a Your Numbers tile, multiply the prize amount shown on the tile by the multiplier shown on the tile. All winning Your Numbers tiles are then removed from the board, and more tiles cascade in until the play area is full. Keep making matches and removing tiles until no more matches are made.

Do you want to play another game that can multiply the fun? Check out the refreshed 50X The Money Scratcher at your local Lottery retailer!