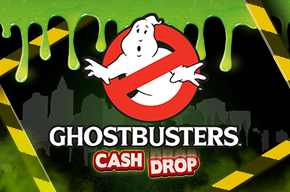 Don’t cross the streams with GhostbustersTM Cash Drop, our frightfully fun instant game! Try to make a cluster of three or more of the same symbol to win a paranormal prize! If you make a cluster while a multiplier is shown, your Multiplier Total will increase. Find three Free Play Symbols to unleash 10 free plays, or reveal three adjacent Bonus Symbols to blast into the Bonus Game.

Each Ghostbusters™ Cash Drop play features a 5x3 grid of symbols and a Prize Chart.

The game continues until the wheel stops on a prize value. At that point, that prize is awarded, and the game ends.