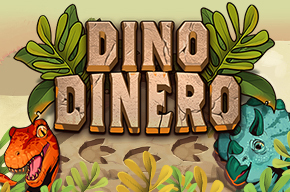 Try to win some bones with Dino Dinero, our most rawr-some instant game! Discover a cluster of three or more of the same symbol to win a prehistoric prize. Find a cluster while a multiplier is shown to give your Multiplier Amount a Jurassic boost. Unearth three or more Bonus Symbols to win a prize instantly. Will you be the next winner-saurus?

Each Dino Dinero play features a play area with 20 symbols, a Prize Chart, a Bonus meter and a Multiplier Amount in the Winnings area for tracking the Prize Multiplier for each game.

In each play, 20 symbols will be revealed in the play area. Reveal a cluster of three or more matching symbols where each symbol is directly above, below or to the left or right of another matching symbol to win the corresponding prize in the Prize Chart.

Reveal three FREE PLAY symbols to unlock the Free Play Bonus. In the Free Play Bonus, press GO to spin the wheel. When the wheel stops spinning, win the number of Free Plays highlighted (5, 10, 15 or 20, in the inner ring) and the Multiplier Amount highlighted (x1, x2, x3 or x4, in the outer ring). The number of free plays then plays out, and any amount won at the end of the free plays is multiplied by the Multiplier Amount.

Reveal three or more BONUS symbols to win an instant prize as shown in the Bonus meter.