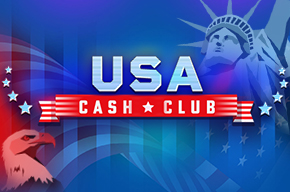 There’s a chance for red, white and GREEN with USA Cash Club! Reveal a cluster of five or more of the same symbol to win a prize. Try to match two symbols in the Bonus Area to unlock an additional feature. Enjoy some star-spangled fun!

Each USA Cash Club game features a 6x7 game grid, a Bonus panel, a multiplier meter and a prize chart.

During play, 42 symbols will be revealed on the game grid, and two additional symbols in the Bonus panel.

Reveal a cluster of 5 or more matching adjacent symbols to win the corresponding prize in the Prize Chart. Winning clusters will be removed, and new symbols will fall into place for each symbol removed. Continue playing until no more winning clusters appear.

Reveal two matching symbols in the BONUS area to activate the corresponding features: