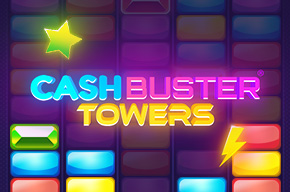 Try to topple towers with Cash Buster Towers! Stack three or more like blocks to bust out a win. If you find a Star symbol in a winning tower, the multiplier for that tower increases. Reveal three touching lightning bolts in a single tower, and you could win up to 15 free plays for that tower. Discover three Bonus Game symbols to activate the Bonus Game, or find five Arrow symbols across all towers to win a mystery prize instantly. Play now for your chance to win!

Each Cash Buster Towers game features up to 5 towers and a meter for tracking collected Instant Prize Symbols. Each Tower features 9 symbols and a Multiplier Meter.

Find a STAR symbol in the same tower as a winning pattern to increase the MULTIPLIER for that tower.

The single tower that activated HYPER PLAYS then enters HYPER PLAYS mode. First the number of plays awarded will show, this will either be 5, 10 or 15.

That number of plays then play out for that single tower.

ARROW symbols can appear on top of colored blocks. The arrows are removed from the board (leaving the colored block on the board). The Arrows fill the Arrow slots on the left-hand side of the board, starting at the bottom.

The INSTANT PRIZE is then revealed above the arrows on the left-hand side, and this prize is awarded to the player.

BONUS symbols can appear on top of colored blocks.

In the BONUS GAME there are 3 portals with a number below each to show the PLAYS REMAINING for each portal.

Each time GO is pressed the PLAYS REMAINING below each of the portals decreases by 1.

After GO is pressed the portals open to reveal:

If the PLAYS REMAINING number under a portal gets to 0, that portal becomes DEACTIVATED. The Deactivated portal will continue to open if other portals are still active, however no Prizes or Multipliers will be awarded from a DEACTIVATED portal. If a DEACTIVATED portal shows an EXTRA symbol when it opens, then it becomes re-activated.

The game ends when the PLAYS REMAINING for all 3 portals reach 0, at which point the PRIZE total is multiplied by the MULTIPLIER total and awarded to the player.