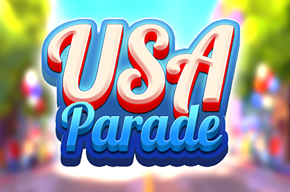 Star-spangled fun is waiting in USA Parade, our new instant game! Try to reveal three matching symbols in a line to win a prize. Time to play in the USA!

Each USA Parade play features a grid of spaces made from two spiraling paths. There is also a Prize Table. In each play, 20 symbols are revealed on the grid. Two Star Symbols are always revealed in the top-right and bottom-left spaces on the grid.

Reveal a horizontal or vertical line of three or more matching symbols to win the corresponding prize in the Prize Table. The winning combination of matching symbols is then removed from the grid, and one Flag Symbol will appear in its place. The remaining symbols move toward the center of the grid, and additional symbols appear until the grid is full.

If both Stars Symbols make it to the center of the grid, the Stars & Stripes Celebration Bonus Round is unlocked.