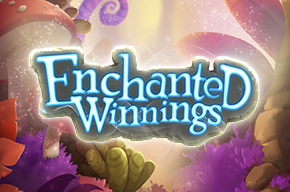 Try to find fairy-tale fortunes and bewitching bonuses with Enchanted Winnings! Snails, stumps and symbols swirl along two spiraling paths. Reveal a row of three or more matches to win a prize and summon a Magic Symbol for a chance to score up to $51,000. Bring both Bonus Symbols to the center of the spiral to unlock the Magic Win Bonus and collect even more winning combos!

Each Enchanted Winnings ticket features a grid of spaces made from two spiraling paths and a Pay Table. After each purchase 20 symbols will be revealed on the grid. Two Bonus Symbols will always be revealed in the top-right and bottom-left spaces on the grid.