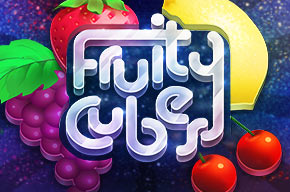 Squeeze the day with Fruity Cubes! Match fruit symbols for a chance to win a prize up to $20,000. If you find a +1 symbol, you'll automatically play an extra reveal with a multiplier on all prizes won! Reveal stars to fill spaces on the bonus meter! 5 stars will unlock the Fruit Squeeze Bonus game for a guaranteed prize. You're bound to have a grape time!

Players may purchase either ten or twenty tickets per game. Each ticket features five symbols. Reveal three, four, or five consecutive matching symbols in a row on a ticket to win the prize shown according to the prize table or reveal a PRESENT symbol to automatically win a surprise amount!

Reveal a +1 symbol to unlock and automatically play an extra reveal with a multiplier on all prizes won.

Reveal STAR symbols to fill the spaces on the Bonus meter. Fill three or four spaces to win the prize shown on the meter; fill all five spaces to enter the Fruit Squeeze bonus for a guaranteed prize.

In the Fruit Squeeze Bonus, reveal fruit symbols and prize amounts to fill one section of that fruit’s glass and add the amount revealed above it. You may reveal a BOOST symbol that will fill one section and add the prize shown to each glass! When all four sections of a glass have been filled, win the prize shown above that glass and exit the bonus.