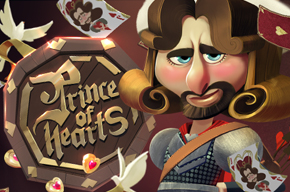 Play your cards right, and you might even find your fortune. To play, flip your deck, and try to find a Prince card to win the prize shown. Collect three Potion symbols to trigger the Potion Quest Bonus game and score a guaranteed win. Uncover the Controller symbol to enter the Treasure Towers Bonus game and win an instant prize. Roses are red, violets are blue, Prince of Hearts is waiting for you!

Each Prince of Hearts game features up to 18 tickets and an area for collecting Potion symbols. Players may purchase sets of 6, 12, or 18 tickets per game. Each ticket features a symbol and a prize amount, a Potion symbol, or a Controller symbol.

Each Treasure Towers Bonus level features 4 towers with prize amounts and 24 cards. Choose a card to reveal either a Suit symbol, 2x symbol, or a Tower symbol. Reveal a Suit symbol to fill 1 section on the tower with that suit. Reveal a 2x symbol to double the tower prizes. Reveal a Tower symbol to fill 1 section on each tower in that level. Upon completely filling a tower, win the prize shown above that tower. If there is a Treasure Chest Symbol atop a winning tower, continue to the next level. If there is a Dragon Symbol atop a tower that has been completely filled, exit the bonus with the total bonus round prize collected. This bonus also ends after level 4 is played.